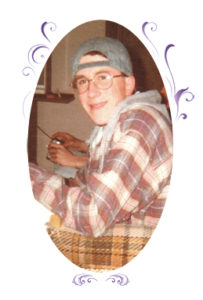 Christmas of 1997 holds quite a painful memory for me. My youngest brother Brian was killed that day along with four of his friends in a car accident in Missouri. April of that year my husband and our family were stationed to Germany. We didn't get to see Brian before he passed away. I will never forget the day Brian passed. Christmas afternoon I became very depressed. I didn't know what was wrong with me and had a hard time snapping myself out of it. A couple hours later my mom called to wish us a Merry Christmas. During the conversation she said she was worried about Brian, that he hadn't come home the night before. Brian was only 21 years old; very young, so I told mom he probably spent the night at a friend's home. She said that is just not like Brian. Mom had made phone calls to Brian's friends and they all said nothing except for one. The lady my mom spoke to said that her son had been killed last night. During our conversation mom didn't tell me these things. We hung up. Twenty minutes later she called back. Brian is dead. "Oh my God! "That's not possible! " I was in shock and didn't know what to do. My husband Dave got on the phone and told my mom that he would get me on the next plane to Missouri. The next morning I was putting on my make up getting ready to leave and had the radio on a German station. A song came on that I had never heard before. I knew it was a message from Brian because I never heard it again. The song said, Don't worry little sister, I'm ok. "Even though I'm dead and gone, I'm ok. "Don't cry little sister, don't cry shortie." I couldn't move! All I could do is sit there and cry. I am twelve years older than Brian, but he did call me those names teasingly because I am only 5''3" and he was at least 6 feet tall. I always had motherly feelings for Brian since I helped so much to take care of him when he was little.

The trip home was extremely long; I cried the whole way there. Family flew in from all over. I stayed for two weeks, but wish it had only been one. I felt like I needed to be strong while my mother grieved. So far I had only had the flight back to Missouri to grieve. All I wanted to do was go home and put my arms around my own two sons and let them know how much I loved them.

That day finally came. So did the grief. I cried and cried, yelled at God, felt guilt; if only I had gone home for Christmas, Brian wouldn't have gone out with his friends. He would have wanted to stay home and visit with me. There were many "if only's". I couldn't believe our Brian was gone. My poor husband and children didn't know what to do with me. My husband likes to "fix" things that upset me and I'm sure it was a horrible feeling for him to not be able to help my pain.

Little did I know the day Brian passed away my life was transformed forever. My path would never be the same. I began reading book after book about mediums, what happens after we die, how to communicate with spirits, what is reincarnation, etc. At that time James Van Praagh had just written his first book. Sylvia Browne had only two books out. I read them all and couldn't wait for more! I read books by Brian Weiss. I found that Brian Weiss had a meditation CD. I immediately ordered it. While listening to the CD I met my spirit guide for the first time. I laid in bed with tears running down my face. I felt so much love for this man; my spirit guide; like I had known him forever but forgot him.

I had known most of my life I had some psychic abilities but didn't know who to talk to about them or how to develop them. Not long after Brian passed strange things began happening. I would think of an acquaintance I had met only one time then see them in the store that day. Numerous things like that started happening. I would walk from our living room into the kitchen and see someone out of the corner of my eye. Startled, I would turn and see nothing. I began saying hello to my brother Brian. I knew it was him.

After reading hundreds of books and visiting psychic medium chat rooms I did my first reading! My whole belief system that I had been taught as a child went right down the drain. I was transformed into a new person. I became more spiritual, less judgmental and finally realized we are all one - all one with God, not separate! I realized God's love for us is unconditional, that he's not a man sitting in heaven ready to judge us. There is no wrong in God's eyes. He loves us all no matter what.

I had always had jobs that I didn't love, or even like. I worked for the paycheck. In the year 2002 I made the decision that my path is to help others. Making that decision was not easy, but I knew I wouldn't be truly happy with a career until I followed the path I am meant to be on. I am now a psychic medium and healer. I help people connect with their passed loved ones on the other side. The feeling I receive by helping other people through the same grief I had and connecting them with their passed loved ones is phenomenal. This is my true path; what I came to this earth for. I will never be the same person I was before Brian passed. I know he is ok and actually helps me. Everything happens for a reason, even the passing of our nearest and dearest loved ones. It's hard to comprehend why such a young life is taken, but there is a reason. Brian is still by my side and always will be.