I was born in York, PA. After my parents divorced, my mother married a military man, and at the age of seven, I became a "military brat" and began living all over the country.

My biological father passed away in 1981 from a motorcycle accident, just a few short months before my wedding. I married my husband, Dave in October, 1981. Dave joined the Air Force in May of that year, so we had a long distance love affair until we got married. I was 17, Dave was 19 years old! We've lived all over the world with our two sons, David, 31 years old, and Jared 29 years old. Both of our sons are serving in the Air Force. Both of our sons, believe it or not, are both stationed in Europe! Jared is in Italy and David is in Germany! I now have two daughters in law who I absolutely love! Hensley and David got married in May, 2010. Jared just got married July 20, 2013 to Daniela who is beautiful inside and out. I love both of my daughters in law just like I would my own daughters. My husband retired from the Air Force seven years ago, after 28 years of service. I am so very proud of my men! I am so thankful for all three of them. After all these years, Dave and I are very happily married! We beat the odds! 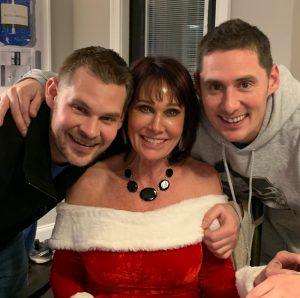 Early on in my life I realized I could pick up on peoples' moods when I entered the room. There have been many times I would "just know" something, and think it was just a coincidence. There were times I was "spoken" to in my mind, but never knew what was happening. Shortly after my husband and I got married I was driving home from the grocery store. I was in that daydream state we all go into once in a while when we drive. I kept hearing, "You're going to have an accident" over and over in my mind. Sure enough I did! Thank God it was only minor, but still, it seemed strange. I never imagined I would be able to develop my sensitivity into something more. When I was younger, there wasn't internet or many books to learn about psychic or medium abilities. I had always been fascinated with the metaphysical. The only books out there that I knew of were astrology books.

I've been told by other psychic friends that my psychic abilities were passed down from my father's side of the family, but I also know my mother and her sister among others on that side of the family are quite psychic and can see and sense spirit also.

Both of my sons and my husband are quite psychic also, although they don't particularly like that word. (men) Jared has even helped a few of his friends out by doing readings for them. One of the readings he did was in tech training school for a friend who's brother had been in an accident. He was so worried, so Jared took him for a walk and let him know what injuries his brother had, what had happened and that his brother would be okay!

We are all very telepathic too! There are times when I send David, Jared or Dave a message through my thoughts. Most times they get it! One particular time when David was stationed in Germany, I kept sending him the thought to call me over a span of a few days. When he finally called, I told him I was telling him to call. He said, "MOM! Was that you? Every time I walked by a phone I would think, "I've got to call my mom!" Often times I will ask Dave to do something (telepathically) and he really receives the message! Most everyday, when Dave has gone out to the store, golf or work, I will think about him and text him asking when he will be home. 99% of the time he is pulling in the driveway! He will walk in and I will say, "I should have waited a minute!" I suppose he enters my mind when he is getting close to home and I "feel" his energy! Even our dogs know when he is getting close! LOL We are so very close that we can read each others' thoughts!

Another very amazing story happened a few years ago when our oldest son was in Afghanistan for the first time. I was running errands and on my drive home I began thinking of David and started getting very worried because we hadn't heard from him in a couple of weeks. I worked myself up into such a worried depression that when I got home all I wanted to do is lie down and sleep. Before I laid down in the bed I got the phone and put it on the night stand and asked the angels to have David call me just to hear his voice. It wasn't two minutes later that the phone rang and it was David! I was so happy and relieved! That folks, is how fast the angels work if you just ask them for what you need!

Finally, here is what happened to awaken my psychic medium gifts:

My brother Brian and five of his friends passed away December 25, 1997. I had never experienced the deep pain of grief like I did when Brian died. He was only 21 years old; and being much older than him, the bond I had with him was maternal-like. I was taught in church when people "die" they cannot see us from heaven, because if they could they would be sad. The day Brian passed away I no longer believed this was true. I had my radio on while I was getting packed to fly home for his funeral. A song came on I had never heard before and never heard again. It was a message from Brian. In the song he called me nicknames only he had known. He said, "I love you, don't cry shortie, even though I'm dead and gone, I'm still here, I'm ok." I knew then Brian was with me. I have received so many signs from Brian to let me know he is around me and doing just fine!

Shortly after Brian passed I was watching the Oprah show, where James Van Praagh was talking about his gift as a psychic medium. I was mesmerized. I immediately bought his book "Talking To Heaven" and every other book I could get my hands on about the spiritual and psychic world. I wanted so much to hear from Brian. I was so ecstatic when I discovered a psychic medium on the internet where I finally heard from him! The facts that were given left no doubt in my mind that it was him. The experience was phenomenal! I knew at that moment my purpose in this life is to help other people heal their sorrow. It was soon after hearing from Brian that I gave my first reading! I also discovered I have the gift as a healer. What an exhilarating feeling to know that I really am capable of helping other people who have the pain of grief in their hearts.

It wasn't easy telling people what I do for fear of being judged. I was frightened of losing the people I cared about most. I thank God everyday for giving me a gift that allows me to help people in such an incredible and profound way. By having the gifts of clairvoyance, clairaudience, and clairsentience, I am able to assist people in communicating with their passed loved ones along with helping to guide them with their everyday situations, such as career, finances, relationships, etc. The overwhelming love I feel from spirit towards their loved ones is also a gift for me!